When and where Stephen Amell was born?

Stephen Adam Amell (born May 8, 1981) is a Canadian actor and producer, best known for playing Oliver Queen / Green Arrow on The CW superhero series Arrow, the show that started the Arrowverse. A lifelong professional wrestling fan, he has made appearances in major professional wrestling promotions, including working a match for WWE in 2015 and for Ring of Honor in 2017, joining the stable Bullet Club and later The Elite.

Stephen Amell was born May 8, 1981, in Toronto, Ontario, the son of Sandra Anne (Bolté) and Thomas J. Amell. He is a first cousin of actor Robbie Amell.

Amell appeared in two episodes of the fourth season of Queer as Folk as the Liberty Ride spinning instructor in 2004. Amell played Adam in the first season of the television series Dante's Cove; he was replaced in the second season by Jon Fleming. In 2007, Amell won a Gemini Award for his guest-starring role on ReGenesis. The same year he was also nominated for a Gemini Award in the Best Ensemble Cast Category for Rent-a-Goalie.

How tall and how much weigh Stephen Amell? 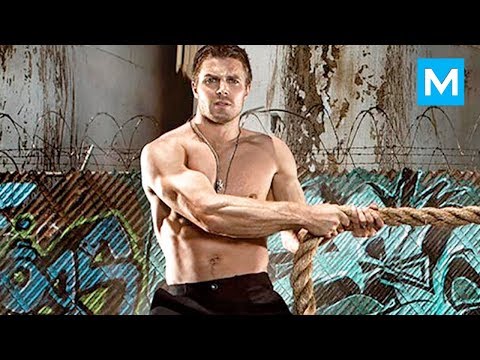