When and where Marie Avgeropoulos was born?

Marie Avgeropoulos (/ˌævdʒɛrɒˈpuːlɒs/, Greek pronunciation: ; born 17 June 1986) is a Canadian-Greek actress and model. She is best known for her role as Octavia Blake on The CW’s post-apocalyptic science fiction television series The 100 (2014–present).

Avgeropoulos was born on 17 June 1986 in Thunder Bay, Ontario to Greek parents. She grew up fishing, hunting and camping, spending most of her free time outdoors. Avgeropoulos started playing drums when she was 16. After studying broadcast journalism for two years in her hometown, Avgeropoulos moved to Europe. Several months later, she came back to Canada and settled in Vancouver.

One of her friends invited her for a casting call in Vancouver, which happened to be looking for drummers. A talent agent recognized her talent and invited her to appear in various national commercials. She caught the attention of director Chris Columbus. He hired Avgeropoulos for I Love You, Beth Cooper, which became her first feature film role. Her appearance in the film gave her the opportunities to star in more films, television shows and magazines.

How tall and how much weigh Marie Avgeropoulos? 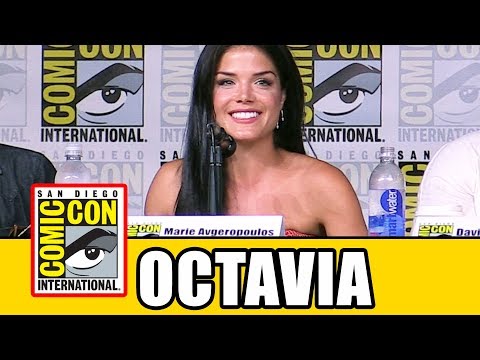