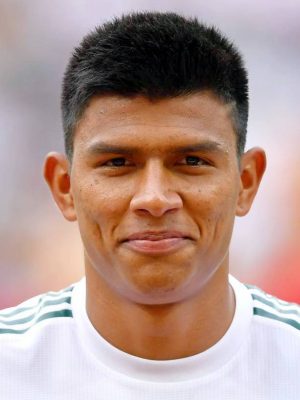 When and where Jesus Gallardo was born?

Jesús Daniel Gallardo Vasconcelos (born 15 August 1994) is a Mexican professional footballer who plays for Monterrey and the Mexico national team.

A regular Mexico national player, he made his debut in October 2016 and would go on to participate in the 2017 CONCACAF Gold Cup and the 2018 FIFA World Cup.

Gallardo began his career at 15 years old with Once Hermanos from 2009, until making the switch to Jaguares de la 48, and ultimately getting the attention of first division team UNAM. He joined Pumas UNAM Youth Academy, successfully going through U-20 and Pumas Morelos.

In 2014, Gallardo was eventually promoted to the first team by coach Guillermo Vázquez. Gallardo scored his first goal with UNAM in a Copa MX group stage match against Toluca on 16 September 2014 that marked his debut with the jersey that ended 2–2 but didn’t make his competitive league debut in Liga MX until 23 November 2014 which ended in a 4–2 win against Monterrey.

How tall and how much weigh Jesus Gallardo?