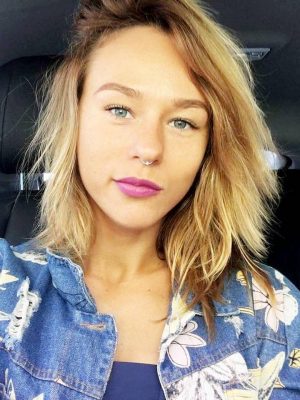 When and where Ekaterina Ivanchikova was born?

Ekaterina Leonidovna Ivanchikova (Russian: Екатерина Леонидовна Иванчикова; Belarusian: Кацярына Леанідаўна Іванчыкава, born on ()August 18, 1987) is a Belarusian singer and vocalist at Belarusian-Russian band IOWA. She was born in Chavusy and is now living in Saint Petersburg.

Katya’s first performance on stage was in 1992 at the regional competition among kindergarteners, while the jury awarded her first place. In school, she was engaged in various kinds of art, including painting, dance, music, piano, and of course, singing. Throughout her adolescence, Katy was busy writing songs and developing ideas for creating a music group. In 2005 she moved to Minsk for education on linguist and journalist in BSPU.

IOWA was formed in 2009 in Mahilyow. In 2010, after a series of concerts in St. Petersburg, the group decided to move to St. Petersburg, where the band members live today.

How tall and how much weigh Ekaterina Ivanchikova?